The links and/or banners marked with (*) and/or “Affiliate Link”, “Advertisement/Affiliate Link” or similar are partner / affiliate links through which IOTA-hardware.com receives a commission as soon as a registration, purchase, conclusion of contract or similar has taken place. For you as a user there are no disadvantages. It does not change the price – also otherwise there is no difference or change in experience for you. In order to be able to maintain the running of the site, websites like IOTA-hardware are dependent on partner / affiliate programs.

The Raspberry Pi is one the most known devices out there for programmming and realizing smaller and even bigger projects in the IOTAsphere.

There are different versions which fit different needs.

The Raspberry Pi 3+ is the most advanced atm.

But for many smaller projects a smaller device like the Raspberry Pi Zero fit perfectly.

For participating on the ICT project for e.g. a Raspberry Pi Zero is enough and even more welcome because of ist lower capaticity.

You can connect different sensors to the Raspberry Pi and run a script that colects the data.

The Sense Hat is a platine which already got all sensors you could wish for included. 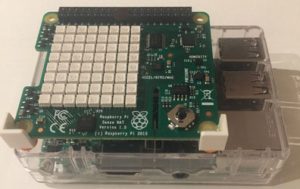 The hat just gets plugged on the Raspberry Pi and is almost ready to run.

Just run a script and the device will even show the collected data on it’s LED screen.